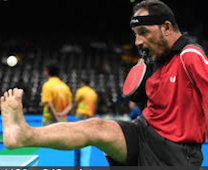 The Rio 2016 Paralympics have finished and been over for a few days now and that has given us time to reflect on the sporting achievements of what has turned out to be a successful games.

Team GB have been as solid as ever and broken records in medal haul as well as events. The pride, the joy and the determination of the athletes has been an inspiration to everyone looking on and cheering from all walks of life. These men and women show another side to humanity and that the world is something to share between us all.

The abled athletes tell us of the hard work, the determination and the gruelling regime they put themselves through in order to be best. In our view the Paralympians have to achieve with twice the hard work and the determination. They are without doubt truly great athletes, whether they win a medal or not. To have made it to the track or the pool, or whatever it may be, they have achieved what everyone else may have considered impossible. This in itself has made each and everyone of these athletes a winner. Well done to you all and well done Rio.

As ever, there are so many athletes that we could single out, but this has already been done hundreds of times over the course of the games. However, we have been driven to mention two that we can at least highlight.

Jonnie Peacock MBE, has epitomised determination to the highest degree. Having lost his right leg just below the knee, this young man wanted to play football. He was encouraged toward a Paralympic sports day, and the rest as they say, is history. Whilst his winning time in the Rio 100 metres final was not his best, he still won in 10.81 seconds!

Our second pointer concerns what we can only say is a superhuman feat by any standards. Egypt’s table tennis player, Ibrahim Hamadtou must be an inspiration to everyone. Forget the multi-million pound footballers and the like; they have everything mapped out for them. This man is a truly great athlete. Having lost both his arms in an accident at the age of 10, his determination is unstoppable. He serves the ball using his feet and plays holding the bat in his mouth. Truly amazing and proof that anything is possible.