Record Breakers back from Rio 2016 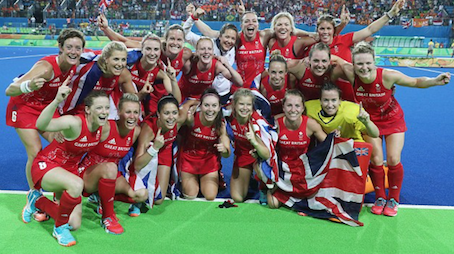 The triumphant members of Team GB have returned to a wonderful home welcoming to mark an historic games in Rio. Great Britain has become the first country to exceed the total of medals won in a games following those which it previously hosted. All in all, the efforts of the whole team has been an inspiration to people wanting to aspire to compete at the highest level. Here at Speed One Sports, our association with Jane Sixmith lead to us to follow with great interest, the trials and tribulations of Great Britain's women's hockey team. What a performance from these ladies who fought and battled and never gave up, beating a very strong and talented Dutch team. We were on the edge of our seats in what to us was far more entertaining than the European football final between France and Portugal. They put every ounce of effort into overcoming the obvious dominance of the Dutch ladies and in no small measure did they deserve to take the game to penalties. Quite a large part of that measure was down to Maddie Hinch and her brilliant goalkeeping. There are many other fantastic performances to highlight in many other sports, but we guess that these have for the large part already been covered. However, we cannot close off without a mention of one of the greatest Olympians to grace the games, Usain Bolt. Not a great deal more can be said about this man, but we at Speed One would like to record our appreciation of an athlete that defines perfection to a point in which he dictates and controls the outcome of his races. A truly great athlete.

We leave you with what we think makes a great sports person - "I skate to where the puck is going, not where it has been.” - attributed to Wayne Gretzky (Ice Hockey).