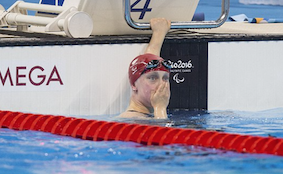 The worrying vibes coming from Rio after the Olympics concerning the funding for the Paralypics made us all feel for the athletes. All the effort and perseverance of the last four years could have been for nothing. Fortunately common sense prevailed over financial sense and in the first days of these games we have been treated to the best of the best. We all remember Ellie Simmonds and how the young 16 year old from Walsall captured our attention. Four years later, Ellie is defending her titles in what is her third appearance at the games. Little did she know that four years ago an eleven year old girl from Northampton wanted to be just like her swimming hero. The young lady is Ellie Robinson and she has indeed emulated her hero and become a Paralympic champion. This fifteen year old will be going straight back to school after Rio and she will certainly have some stories to tell her classmates. We look forward to many more inspiring performances from all the athletes taking part.

You will never know your limits unless you push yourself to them.