England finished off the Quilter Internationals with a 37-18 win over Australia at Twickenham on Saturday.

In spite of dominating the set-piece and the breakdown, England fought to make the most of the ball in the first half but found their finishing touches in the second half as the home side's forward dominance eventually told.

It was the faultless start for England who scored in only two minutes after defeating the Wallabies’ scrum. Mark Wilson picked up to feed Ben Youngs, who then provided Jonny May with a simple try.

Matt Tommua clawed back three points in the seventh minute with a penalty but England were breaking through Australia’s defence effortlessly.

England exploded out of the blocks in the second half as Daly took a pass from Farrell on a classy supporting line and then showed his pace to swerve away from Haylett-Petty and score. Farrell converted and England were 20-13 up.

With ten minutes to go, Manu Tuilagi made his long-awaited return to international rugby and immediately made two strong carries against a tiring Wallaby defence.

It was Tuilagi's presence in attack that gave Farrell the space to run in England's fourth try and despite Folau scoring in the 80th minute, it was scant consolation for Australia who were soundly beaten.

England’s next match is against Ireland in Dublin. 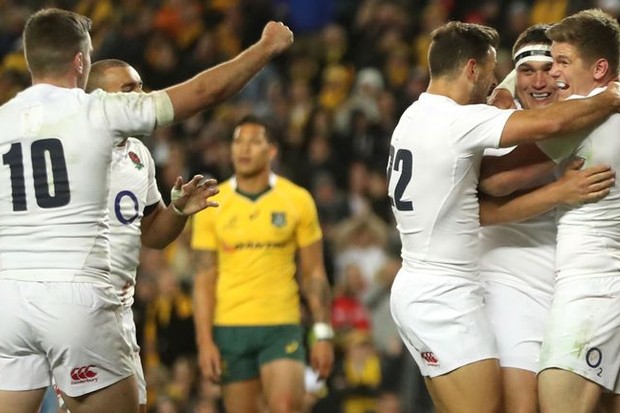